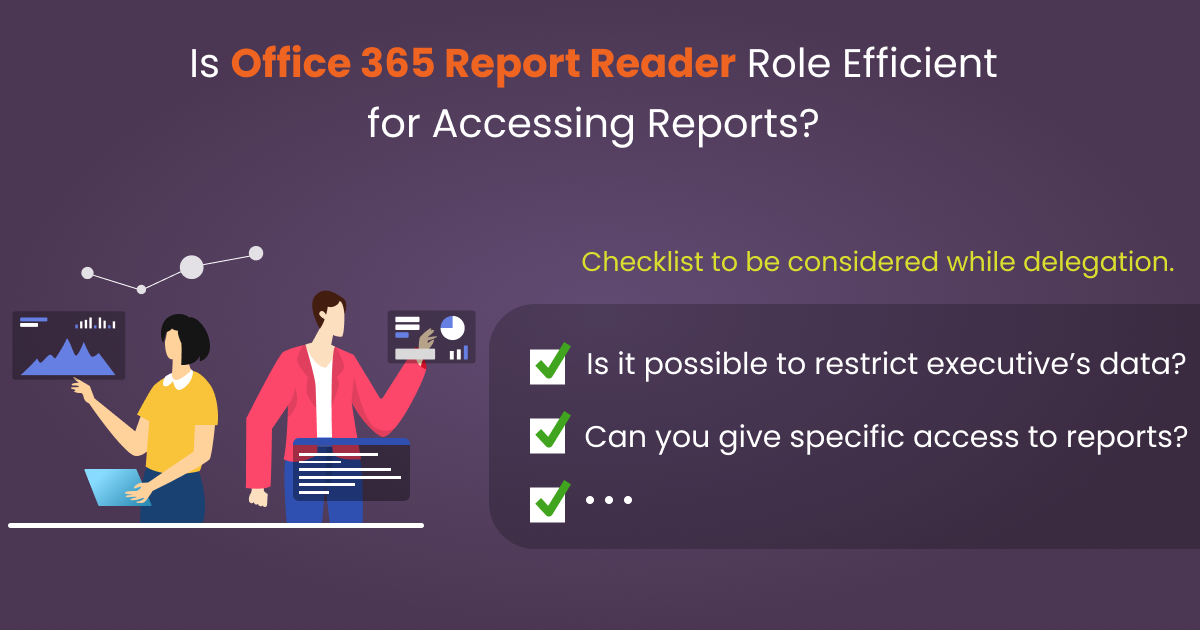 Office 365 offers multiple ways to lighten the burden of single-handed admins, such as supporting the idea of delegating email & calendar permissions and granting administrative roles to various Office 365 services.

However, managing Office 365 reports remains challenging due to its sheer size! But you can reduce the workload by delegating the reports to other users in Office 365. So, let’s examine how we can grant access to reports and what needs to be considered before delegating them.

How to Get Office 365 Reports?

The following section will show what these different reporting options can provide.

What is Reports Reader Role in Office 365?

Previously, only Office 365 admins could access their organization reports, which made it difficult for large organizations to monitor their tenants and manage their reports simultaneously. So, back in 2017, Microsoft announced the Reports Reader role to provide users with an overall view of Office 365 reports without modifying them.

This Reports Reader role came as a big boon to M365 admins. This role can be assigned to any user within their organization, and no additional privileges are required.

Purpose of this Reports reader role:

Users with this role can

Although this is a great start, this didn’t work the way it should!

What is Usage Summary Reports Reader?

The Usage summary reader role comes with multiple benefits like

A Usage summary reports reader role gives only a broad overview of the organization’s data (Office 365 Usage). Comparatively, this role provides fewer reports, such as no details about individual Office 365 users and no auditing or sign-in log records.

Could Power BI Be the Best Alternative for the Report Reader Role?

Where did Power BI Reports Fail?

Power BI reports offer many advantages, like generating datasets, dashboards, and reports for analysis. But it’s not all sunshine and roses when it comes to sharing reports and other editing configurations.

Though it came up with numerous benefits, there are several downfalls that outweigh the pros of Power BI reporting.

Office 365 Report Reader Checklist: What to Keep in Mind?

To assist your help-desk technicians or other users with reporting, you should grant them access to specific reports. So, in the following section, we’ll see the top 6 checklists you should consider when you’re planning to delegate access to Office 365 reports.

Thus, you have to be able to tweak and filter every possibility and delegate access to the reports.

5. Empower Resource owners with the reports they require – It is important to handle the users the right access they hold right for. For example, a Site owner must be able to track all traffic and usage to the Site. Therefore, you should empower them with all the reports they possess.

While admins plan to delegate access to reports in Office 365, these checklists must be taken into account seriously. If you’re confused about how to perform these actions, no worries we’ve got you! Try using AdminDroid, an Office 365 Reporting tool. It checks in every item on the above checklist without any doubts or queries.

With the newly released “Roles” feature in AdminDroid, you can delegate reports in AdminDroid to any user in your organization. One major perk that AdminDroid offers is that any Office 365 user can be assigned to any role without a license restriction.

To top it off, AdminDroid allows you to schedule, e-mail, and set alerts for each of these reports. Additionally, providing more than 1500+ pre-built reports and 20 smart visually appealing dashboards to know about your Office 365 environment at a glance. It generates reports on Office 365 reporting, auditing, analytics, usage statistics, security & compliance, etc., on multiple Microsoft 365 services.

Isn’t that like all your needs rolled into one? Yes, it does! So, what are you waiting for? Enable your users the possibility to gain actionable insight in order to drive usage and increase communication and collaboration with AdminDroid. 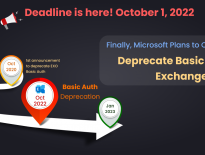 Announcements How to Deal with Exchange Online Basic Authenticat…
Follow us!