Recently, remote work has become increasingly popular. Rather than being limited to the traditional office-based working system, users have switched to an “anywhere-anytime” culture. As a result, users have now started to communicate using multiple devices.

There has been lots of positive feedback from employees since this switch, as it reduces costs, increases flexibility, and increases productivity, but in the long run, it is not as easy as it seems. Having a remote work culture can pose multiple risks for your organization, like causing serious security implications and making it difficult to monitor the performance of employees.

Out of these, the most vulnerable ones that might not seem as risky but cause potential danger to the organization are unmanaged devices. Unmanaged devices are the means by which attackers perform their malicious activities. Using unmanaged devices in an insecure network causes Office 365 users to be likely to lose huge enterprise data.

What are Office 365 Unmanaged Devices?

Unmanaged devices are devices that are not actively managed and monitored by your IT department. Devices such as mobile phones, printers, etc., fall within these categories.

Businesses generally benefit from allowing their employees to work from anywhere with any device as long as they take the necessary safety precautions. Even though unmanaged devices in Azure AD have many benefits, they also carry some risks. When unmanaged devices (BYOD) are not fully understood, they can pose a security risk to business systems.

For this reason, it’s better to either limit device access or monitor access from unmanaged devices. Below are a few ways to mitigate the increased business risks associated with unmanaged devices in Office 365.

BYOD(Bring your own device) approaches pose a higher risk of complications, so it’s essential to ensure all privacy and security issues are addressed. Therefore, it’s a good idea to block access to cloud apps from unmanaged devices.

Steps to Block Access to Microsoft 365 Resources from Unmanaged Devices:

Due to organizational policies, you can’t access this resource from this untrusted device.

For instance, assume that your organization wishes to give all Office 365 users access to all services except SharePoint.

To perform this action, open the SharePoint admin center and follow the instructions below:

Keeping user access limited reduces the risk of accidental data loss in unmanaged devices. With the above setup, users on unmanaged devices have browser-only access (only previewing files) and cannot download, print, or sync files.

Users will begin to notice the below type of error when you limit access to SharePoint contents.

Your organization doesn’t allow you to download, print, or sync using this device. To use other actions, use a device that’s joined to a domain or marked compliant by Intune. For help, contact your IT department.

Never Slip Away with Unmanaged Devices:

Security threats are the major concern with unmanaged devices in Office 365.

We can’t avoid using unmanaged devices, but we can manage and monitor those devices and have secure Office 365 access.

How to Monitor Unmanaged Devices?

Isn’t that a lot of hassle? Yes, it is! As there is no direct access to the reports, we have to search and goof around with every failed unmanaged device login case.

It’s not yet possible to monitor unmanaged devices in Azure AD in depth. Therefore, the IT department stumbles on risky behaviors by unmanaged devices, which expose the network to malicious threats.

Manage the Unmanaged Devices with AdminDroid:

Office 365 admin center reports are presented in a collection of huge lists without any classification. Consequently, categorizing and interpreting those data for unmanaged devices takes quite some time. So, is there a way to directly access reports about unmanaged Azure devices?

These reports will provide information on all aspects of unmanaged device sign-ins. Some of them are,

With the AdminDroid unmanaged device sign-in analytic dashboard, you get detailed information on all queries on the comprehensive Azure AD analytics dashboard. It provides a comprehensive view of all user actions signed in from devices other than those under your Office 365 organization asset.

Take a look at the features of AdminDroid with a free trial now! 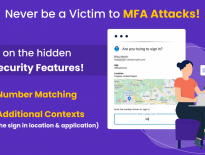 General How to Safeguard From Security Flaws Found in MFA … 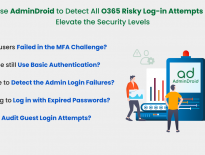 General Secure Your Office 365 Tenant from Risky Log-in At…
Follow us!