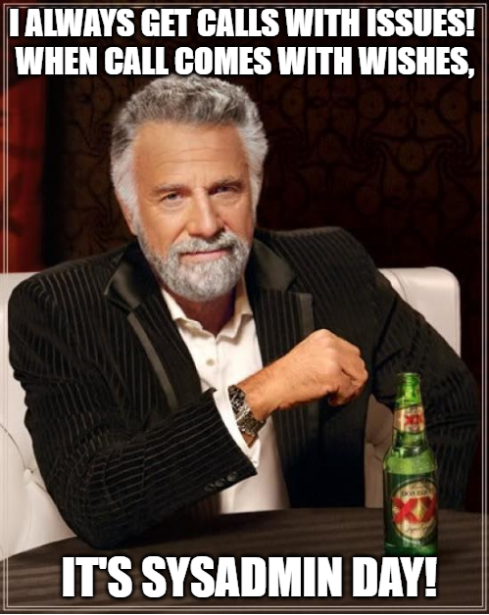 The last Friday of July usually is a cause for celebration for System Administrators across companies and the world. On this day people from all walks of corporate and public life gather to acknowledge and celebrate the timely service of Sysadmins and other IT Workers, something which we have all gotten so used to. It has been the case for the past twenty years.

But this year has been a tad special. We have had to deal with an unprecedented global health crisis that in the past would have put a halt to all economic and personal activity. Technology, though, has given us the ability to continue functioning despite the present situation. System Administrators have had a huge role to play in this.

Given this situation, I would like to recount a story I was told by a friend. For me it drove home the point that an act of kindness can change the day and possibly the life of a person.

What follows is a paraphrase of the story I heard.

“I work as an IT Technician at a reputed hospital in the city. When the Corona virus pandemic broke out, we had to deal with a surge of patients just like other hospitals elsewhere. While our IT Team did not have much to do with the patients directly unlike the doctors, we were also put to the test. We had to keep all the critical health care systems online 24/7 and had to hurriedly attend to support requests, which were plentiful. One day, I received a call from a doctor in the pediatric department. He had called in with an issue with his computer which I found was quite simple enough to fix over the phone. Halfway through our call, I heard a loud ringtone from his side which I could guess was his cell phone. He asked me to wait for a few seconds while he attended to this other call. In what I thought was haste, he forgot to put me on hold, and I could not cut the call out of professional courtesy. For some reason, he used the external speaker on his phone. In retrospect, I realize that this was holy providence. I put my handle down not to overhear his conversation. But my curiosity took over me.

I need to take a moment to explain my curiosity. This doctor was the youngest in the whole hospital and, by word of mouth, was the calmest. During my employment here, I had the chance to talk to him a couple of times and I could instantly confirm this was true. He was like a monk, not in appearance, but in attitude. When such a guy exhibits haste, especially of the kind that is noticeable over phone, one is bound to take notice. So, I tuned in to the conversation,making a note to beg God for forgiveness later The caller turned out to be his mother. Over a span of fifteen minutes, I got to know more about him than any other one-on-one conversation would have revealed, and I felt heart shattered.

Turns out, the doctor was from a small town far off from the city. His father was suffering from a chronic ailment of some sort which I understood had no cure. He was on a strict medical regimen. This being sad enough, I understood that he had stopped taking medicine for a while and was clamouring to see his son. This issue had been going on for a couple of weeks and the doctor was furious that his mother had hidden this information. His mother explained that she did not want to add to his worries with him already being choked with work stress. The call ended in a flurry of tears. I put down the phone. The doctor didn’t call me back.

Two days passed and I was so flooded with work that I had forgotten about the doctor and the conversation. During an afternoon, he called me again. He had a technical issue that needed fixing. This time, I couldn’t guide him over the phone. I had to go to his room.

I was in for a shock when I saw the doctor. He looked emaciated and pitiful. I tried to forget about the conversation and focus on the issue. As I walked him through the solution, I could sense that he was grieving for his father.

It took about an hour or so. Once I fixed his issue, I got ready to leave. I was and still am not the kind of guy who liked to poke into others’ problems. But I felt really sad for him and hesitantly probed by asking him how his work was going on:

“Work has certainly gotten tougher post the pandemic. But that’s what we signed up for, didn’t we?”, he replied. While his voice was calm and collected, his face betrayed how he felt inside.

I agreed with him. On a whim, I started talking about my family and how work gave me little space to spend time with them.

“Yes. I guess once this is all over, we will all get a nice, extended vacation”. Same voice, same face.

I impulsively started talking about my father. I know I was being cruel, but somehow, a voice at the back of my head kept asking me to probe further.

“Take good care of your dad”, he said

“I don’t think that’s possible anymore…He passed away a few years back”, I replied.

My statement triggered a chain reaction. The doctor broke down and tears started rolling from his eyes. I felt terrible. From there, we moved to the hospital cafeteria, which surprisingly was open.

We had a vivid discussion and he told me about his problems. His father suffered from terminal cancer. He used the word ‘metastasis’ for which I did not know the meaning. His job at the city meant he could not take care of his father. The doctor revealed that his father’s demise was not far off and that he wished to see him one last time.

“Why not try a video call?”, I suggested.

“I know. But my parents live in a small town. The town doesn’t have enough bandwidth”, he replied.

“I believe I have a solution for you”, I told him.

The doctor was quite surprised.

I assured him that he was going to see his father the next day.

As an important member of the System Administration team of a large hospital, I was granted some exclusive privileges and one such privilege was the knowledge of and access to all the different servers in the hospital data centre. I also knew that the hospital IT Team had invested in Scalable Video Coding Software for its telemedicine program. All I had to do was to use the software license and install it on a redundant server, grant the hospital network’s VPN access rights to the family of the doctor and not get caught doing so. Voila, low bandwidth video conferencing for free (at least for the doctor’s family). My task was to set everything up covertly and wait for the next day.

Next day came and the fix was ready. We were waiting together at his room. We turned on his desktop computer and logged on to the application. A short while later, we could see his mother. She looked old but had one of the brightest faces I’ve ever seen. Perhaps it was because she was seeing his son after a long while. After a quick exchange of pleasantries, she turned the camera to her husband. I somehow felt moved when I saw his father. While he was wasted to the bone, his eyes expressed something remarkable. Something transcendental. Something that could be described only as pure, unadulterated joy.

Tears rolled down the faces of both father and son. I left the room to give them some privacy. After an hour or so, the doctor walked outside. He shook my hand and thanked me dearly. I told him it was my pleasure. I was Tech Support, after all, wasn’t I? It was my job to support people in times of need.

I returned back to normal work after those two days. The pressure of working at the hospital during a pandemic slowly got back to me. Endless requests for issue fixes, maintaining IT, life became normal again…

A week must have gone by when I received a message from the doctor. He wrote that his father had passed away a couple of days back. The doctor couldn’t get to go to bury him, but he saw his father die with a smile. And that was all he needed.”

The Sysadmin job isn’t just about fixing computers and patching servers. It is about the fundamental human quality of helping people and being there for another person when he needs him. Let Sysadmin day be about celebrating help and companionship. 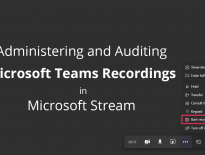 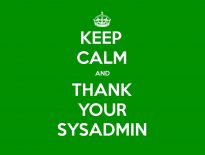